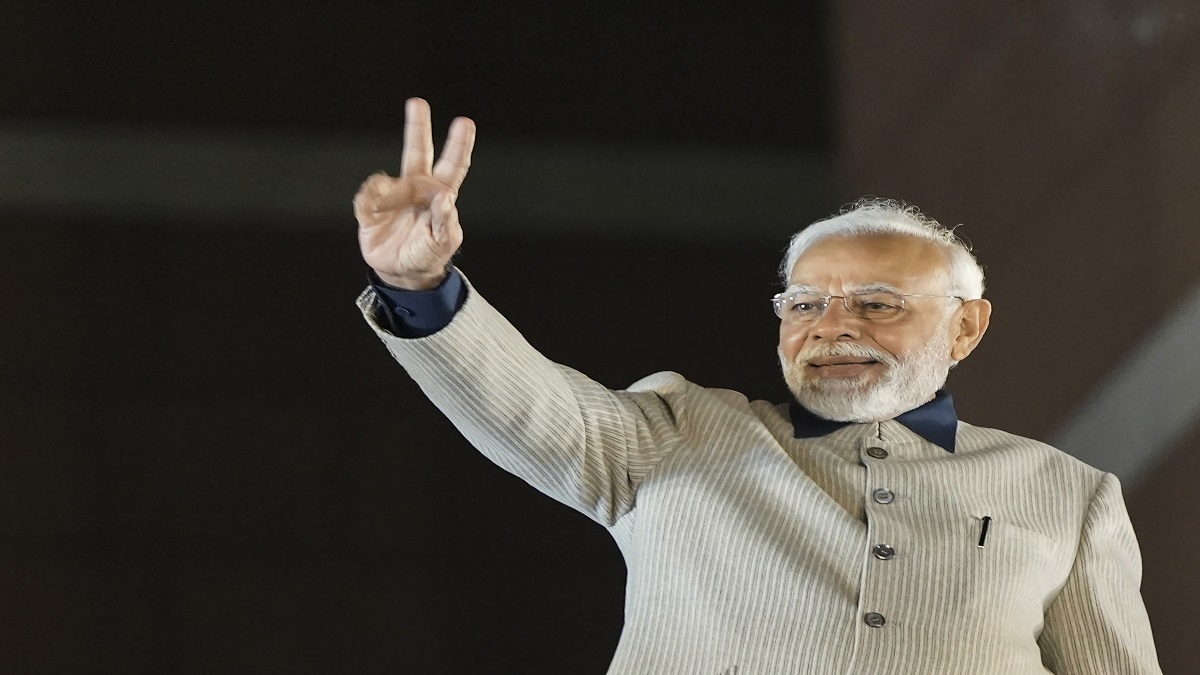 Election results 2022: Prime Minister Narendra Modi asserted today (December 8) that the results of two state assembly elections and several by-polls highlight people’s support to the BJP’s vision and commitment to development rising above social faultlines, which he said were being exploited by rival parties for political gains.

India’s future can be made bright not by raising faultlines but by erasing them, he said in his address to BJP workers at the party’s headquarters after the BJP wrote new records in his home state by winning over 155 seats and fetching over 52 per cent of votes.

“The results of Gujarat have proved how strong is the desire of the common man for a developed India. The message is clear that whenever there is a challenge before the country, people show their faith in BJP,” said Prime Minister Narendra Modi.

The BJP lost to the Congress in Himachal Pradesh though. While the people of Gujarat have broken records in breaking new records, the BJP fell behind the Congress by less than one per cent votes in Himachal Pradesh, he noted and said his party’s win in Kurhani bypoll in Bihar against the combined might of the grand alliance of the RJD-JD(U)-Congress is an indication of the times to come in the state.

In an apparent attack on the Aam Aadmi Party (AAP), Modi invoked the Hindi idiom ‘Aamdani athanni kharcha rupaiya’ and said people have realised that short-term politics will inflict a big harm on the country. What will be the situation if such a policy is followed can be seen in our neighbourhood, he said in reference to financial hardships in countries like Sri Lanka and Pakistan.

The support to the BJP shows people’s rising anger against dynasty rule and corruption, he said, noting that the party also won the prestigious Rampur bypoll in Uttar Pradesh. He said attempts were made to fail the BJP-run municipal corporation in the national capital and people were cheated in the process, a reference to his party’s charge that the AAP government in Delhi denied funds worth hundreds of crores owed to it. The AAP has ended the BJP’s 15-year-reign in the local body and has also got nearly 13 per cent votes in Gujarat.

“There is no doubt in people’s mind that if the country is prosperous, everyone’s prosperity is guaranteed,” he said, asserting that voters have supported the BJP in the times of crisis as seen in the party’s win in polls held during the Covid pandemic and also when it is working to fulfil their aspirations with a vision of developed India.

The ruling party is working to empower the poor, taking all basic facilities to people and, at the some time, building modern infrastructure in sectors like roads, rail, airports and optical fibre, he said.

“I bow to people, their blessing is overwhelming,” he said. “Be it villages or cities, the poor of middle class, youth or women, every section of society has supported the BJP,” he said. The BJP has won 34 of 40 seats reserved for the SCs and STs in Gujarat in a thumping majority, he added.

The prime minister also accused the BJP’s rivals of exploiting social faultlines and divisions for political gains in the name of language, region, lifestyle, eating habits or communities. People, especially the youth, can see through it, he said, adding that his party got support among over one crore young voters in Gujarat who have seen only its rule because they can see its work. “India’s future can be bright not by raising fault lines but by erasing them. Hundreds of reasons exist for fighting but one reason is enough for us to unite, which is our motherland India. We have to move ahead with the goal of ‘India First’,” he said.

Hailing the verdict in Gujarat, he said the state’s affection for the BJP despite it being in power for nearly 25 years is unprecedented. He noted that he had urged people to make “Bhupendra (Chief Minister Bhupendra Patel) break all records of Narendra” and they have done it. In a swipe at the BJP’s critics, he said the country needs to know the “games” of people who call themselves neutral. There is no discussion on those who lost their deposits in Himachal and Uttarakhand, Modi said, a likely reference to the AAP’s rout in these states after it made tall claims on its prospects there.

Gujarat Chief Minister Bhupendra Patel has won his seat by almost two lakh votes which is an impressive margin even in a Lok Sabha election, he said, adding critically that “thekedars” (contractors) have different metrics of evaluating others and the BJP has to advance in the face of these “zulms” (atrocities). The prime minister said he had seen it all as his every move was savaged after 2002, an apparent reference to the communal violence in the state when he was chief minister, but he benefitted from it by being alert all the time and making positive changes in himself.

Those who are lauded all the time have little chance to correct themselves, he added. These “zulms” will now rise against him as well as the BJP, he claimed, telling party workers to increase their restraint and spirit of service while continuing to work.

Victory in Gujarat assembly polls comes at a time when India enters the Amrit Kaal, which shows that during the next 25 years, politics would be about development, said Prime Minister Narendra Modi said on Thursday.While addressing people at the Bharatiya Janata Party (BJP) headquarters “I had told the people of Gujarat that this time Narendra’s record should be broken. I promised that Narendra will work hard so that Bhupendra can break Narendra’s record.

“Gujarat has broken all records by giving the biggest mandate to BJP in the history of Gujarat,” he added.

PM Modi said that because of the people’s affection and blessings, even in places where the party didn’t win, its vote share increased.

“The blessings and affection of the people have been extraordinary. I bow to them. Even where we didn’t win, our vote share increased. We won in Rampur. The result in Bihar also indicates future trend in the state,” he said. PM Modi said the party would work for Himachal Pradesh, despite the party’s loss in the state.

“We lost the Himachal elections by less than 1% vote. This had never happened in history. I assure the people that though we might have lost, we will be committed to the state’s development,” he said. He said that people have rejected the politics of dynasties and corruption.

“This success has come when India entered the ‘Amrit Kaal’. This shows that the next 25 years belong to development and it mirrors the expectations of the country. It also shows that people’s anger is rising against corruption and dynastic politics.

PM Modi said the party has reached this success after facing several ups and downs.

“We haven’t reached this success easily. It is the hard work of five generations, from the time of Jan Sangh. Lakhs of workers, put down immense hard work and dedicated their whole lives to the party,” he added.

He further warned that everyone should remain “beware” as more “attacks” can take place in the coming times.

“After 2002, each and every step of mine was lambasted. But, I kept on learning and improving myself. Now, we have to remain ready for more such “attacks” in future,” he added.He further urged all sections of the public to unite for the development of the country. “We have received support from all sections of society. Now, it is time for the country to unite and work for the development of the country with the vision of ‘Sabka Sath, Sabka Vikas, Sabka Vishwas, and Sabka Prayaas’. When the country will celebrate 100 years of its independence in 2047, we will hand over a developed country to the young generation,” he added.

Meanwhile, according to the latest information from the Election Commission, BJP is poised to win 156 seats in the 182-member Gujarat assembly having already won 142 seats and leading on 14 seats.

While, Congress is set to suffer its worst electoral defeat in Gujarat, having won 16 seats and leading on one. Aam Aadmi Party (AAP) has been able to make its entry into the state assembly having won five seats and increasing its vote percentage to 12.82 per cent. The BJP, which has won its seventh straight election in Gujarat, is set to not only improve its own best record of 127 seats in 2002- the first election with Narendra Modi as a chief minister- but the Congress tally of 149 seats in 1985. Meanwhile, the new chief minister of Gujarat will be sworn in on December 12 at 2 pm, state BJP chief CR Paatil said on Thursday.

E-rickshaw and police engage in cat-and-mouse chase; see what happens next | WATCH

Data protection: Supreme Court asks WhatsApp to ‘publicise’ undertaking given to Centre in 2021