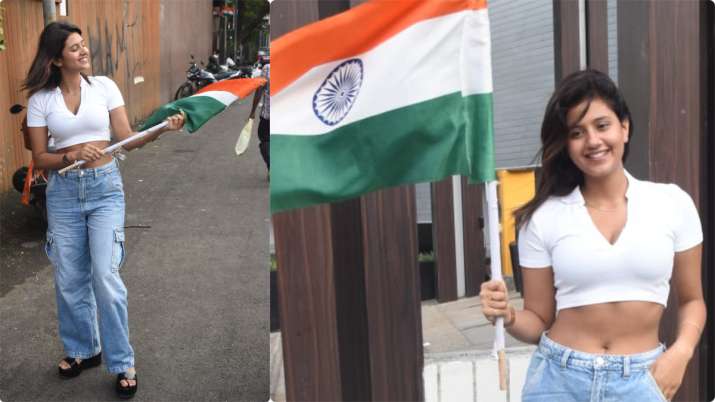 Anjali Arora’s alleged MMS video leak made quite some noise on social media. Thanks to her Instagram Reels, she was already a popular face on social media. Her popularity grew when she appeared on Kangana Ranaut‘s show Lock Upp. Post the reality show, she was seen in multiple music videos. She also caught her name in controversy when it was alleged that MMS video of hers got leaked online. While Anjali quashed the video and photos, they still got a lot of attention. And, now another video of Anjali where she is seen posing with the National Flag has upset a certain section of netizens.

In the pap video, Anjali is seen wearing a crop top and jeans and holding the flag in her hand. Many feel she is disrespecting the national by posing with it in a ‘revealing’ outfit. Several others slammed her for gaining attention and posing with the flag like a prop. Soon after paparazzi Viral Bhayani posted the video on his Instagram account, netizens rushed to it and trolled Anjali Arora brutally. Take a look at the video and photos:

Some time back, photos and videos apparently featuring Anjali Arora went viral. Many claimed that it is a leaked MMS of the actress. During a recent interview with Siddharth Kannan, Anjali opened up and broke her silence on the controversy.

Meanwhile, Anjali Arora has given a new twist to the classic number, ‘Saiyyan Dil Mein Aana Re’, which was sung originally for the 1951 movie ‘Bahar’ by Shamshad Begum and was picturised on Vyjayanthimala. The original version was composed by S.D. Burman, but the track has been given a new spin with Gourov Dasgupta’s music, Shruti Rane’s vocals and contemporary dance moves by Anjali.

Do You Know Diljit Dosanjh performed in NCR and our ‘Vibe’...